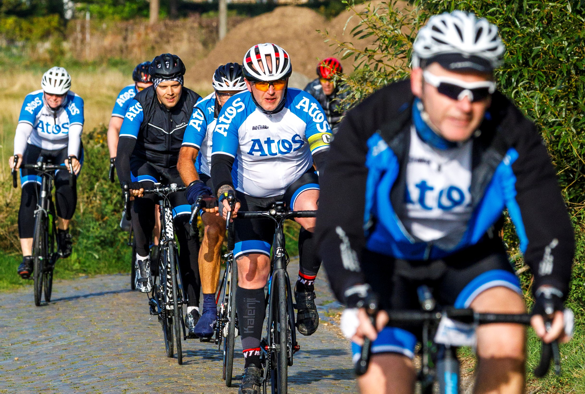 What started small in 2004 in the Netherlands, has grown in 17 years into an international event for ± 65 cycling participants and a dozen facilitators. The first 4 years the 2-day bike tour rode from Eindhoven to Groningen, after which the route was changed in 2008 into Paris to Eindhoven (the “cities of light”). This made the AtosTour a bigger and increasingly international event.
The cycling participants now have 470 kilometers to complete with around 4400 meters of altitude to climb.

The first aim of the AtosTour is to create a mutual bond between colleagues from different countries and backgrounds by exercising together and contributing to a good cause. Safety and conviviality are paramount here: we ride together and we arrive safely at home together. And every AtosTour the participants ride for a good cause, for people with less fortune or less health. Since 2010, the Dutch participants have been cycling for KiKa and colleagues from other countries are cycling for their national anti-cancer foundation.

In 2020 we will raise money again for several cancer organizations.