Motards
During the two AtosTour days the peloton is escorted by six motards. All motards are very skilled motorcyclists and have extensive experience in escorting a peloton of cyclists and escort cars. They make sure the group stays together and is separated from normal traffic as much as possible. This means that the motards stop the traffic whenever it’s necessary on crossroads and roundabouts and give way to the AtosTour peloton to pass safely. This all in compliance with local rules and regulations. The motards also take care of accompanying cyclists in case of a flat tyre and escort the cyclists back to the peloton safely. The six motards, the tour director and other staff use mobile radios to keep each other posted on progress and to warn each other in case of unexpected events and calamities. The motards pass on messages from cyclists to the support team and vice versa.
Besides this, three of the six motards fulfill an important medical role. The medical team consists of an emergency doctor and two ambulance paramedics. When necessary this team gives medical support to the AtosTour participants. This may vary from a simple painkiller to a treatment after a fall or accident.
The emergency doctor will gather medical information from the tour participants before the tour starts (voluntarily) . This confidential file is used only by the emergency doctor for necessary medical treatment and will be destroyed directly after the AtosTour.

All AtosTour participants are obliged to follow instructions given by the motards. From the moment the AtosTour peloton departs until the moment the peloton stops, one of the motards is overall supervisor. He gives the start and stop signals and decides on possible additional (sanitary) stops. The motards operate closely together with the national police forces and municipalities in France, Belgium and The Netherlands. The authorities and administrations along the route are informed on the passage of the AtosTour. Each year the route at the east of Paris is approved by the Paris prefecture. In Belgium the motards use the mandatory bracelets and stop signs. In the Netherlands the route is authorized annually by the Eindhoven municipality. The motards follow a yearly training and pass exams at the Stichting Verkeersregelaars Nederland to become a certified traffic regulator.

The motards and all other members of the support team do their utmost best to create a safe AtosTour. But a safe tour is only possible if all participants are aware that safety is the responsibility of each and everyone in the tour. 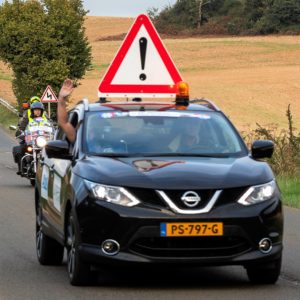 Technical support and transport of luggage
The AtosTour mechanic is in the first support car at the end of the peloton. His van is equipped as a mobile workshop. The mechanic has a variety of spare parts on board for the repair of flat tyres and broken chains. Furthermore he has large experience with all kind of situations as bended handlebars, faulty brakes or broken clips. There is a special bicycle trailer for the transportation of broken bikes or bicycles from exhausted participants. The driver of the mechanic’s van assists the group in all kinds of situations and problems.
The second support car is a minibus with trailer for the participants’ luggage. The driver and co-driver have been part of the AtosTour support team for many years. Exhausted participants can rest for a while in the bus until they are able to continue again. During the breaks the driver and co-driver distribute fruit, energy bars and water.

Fotographers
An important part of the support group is the car with two semi-professional photographers. The photographers are responsible for the photoshoot in Paris and cover the complete AtosTour on video and photo. Immediately after the start they rush to their first photo spot and they keep on moving from one spot to the other to cover everything. For safety reasons in Mons they stay with the AtosTour peloton, the same goes for the departure out of Mons the next morning. Of course the photographers are in Eindhoven on time to capture the finish and the welcome ceremony. All participants will be informed when the photos are available on the photographer’s website.